We’re not so different, you and me. 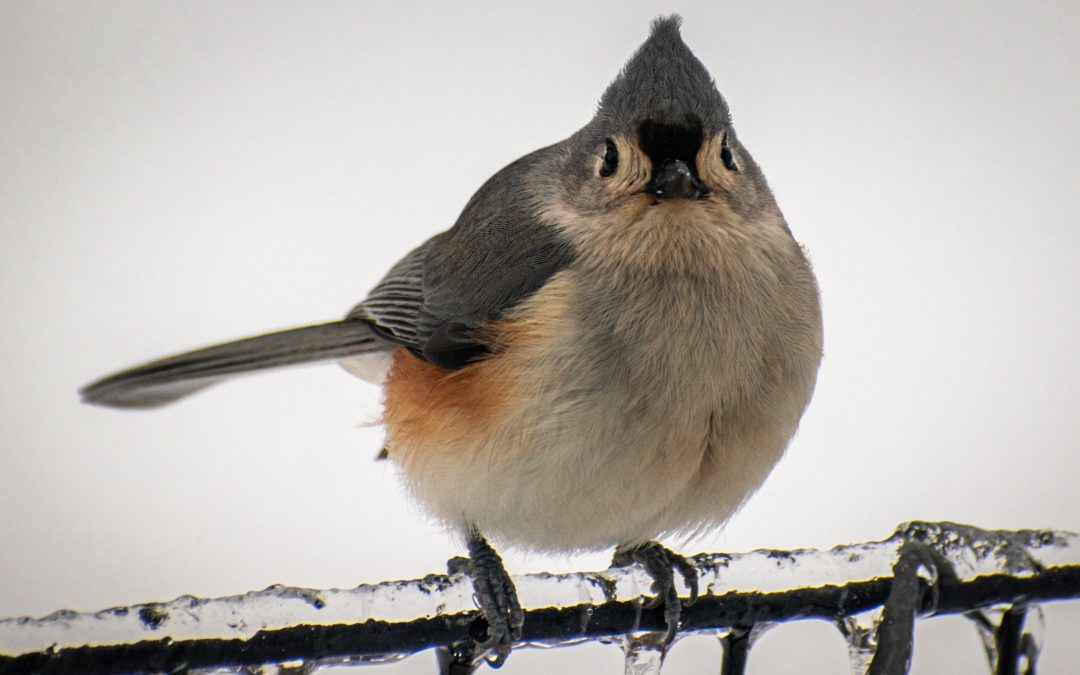 An angry tufted titmouse has been hurling itself violently and repeatedly against my bedroom window for the last three weeks.

Unlike cases where a bird accidentally slams itself into a window mid-flight, this little thing flings itself against the window, taunting an imagined foe, and repeats. Over and over. From dawn until dusk. Maybe you knew this already, but it turns out this is a behavior associated with the breeding season. Except when a bird commits to doing it forever, which, evidently, this titmouse has done.

​1) Titmouse sees his own reflection in the window and gets the wrong idea entirely about what’s going on. A one-sided fight ensues.

​3) Harder and harder the titmouse fights until sundown, when—I assume, utterly exhausted—he rests his body and spirit for the next day’s battle.

(Side note: Let’s not spend time here on preventative measures I might take. Trust that I am exploring those in full and that is not the point of this story.)

I have felt a range of emotions towards the little bird. And I’m not proud to admit, I have secretly wished Nature would “do its thing” and free me of the Tufted Titmouse. (Do owls eat smaller birds? I can only hope so…)

Every morning, we join up our daily routines: mine starting with coffee and a little yoga, and his starting with flying at full speed into his own reflection, again and again.

​The author has an epiphany.

At some point, through the din of bird body slamming against glass, I realized something:

Mr. Titmouse and me-we’re not so different from one another.

In the past months, and especially the past week, I, too, have felt myself raging against an enemy that doesn’t seem to be yielding—only growing stronger. I too have felt incited to fight a passionate, futile fight. And I know it’s not just me. Watching the news and social media, I see a lot of angry titmice, reflecting back to me how I feel inside, bringing out my Inner Titmouse for another round.

Contemporary media provide an unsatisfying, inevitable container for anger. It is like the Internet has a hole in the bottom, and the more anger and strong opinions I put in, the more that bucket needs filling, and the less satisfied I feel.  Needless to say, I don’t like the Tufted Titmouse feeling. It is disempowering and it does not help anyone or anything. I bet you aren’t fond of it either.

​The author makes a promise to herself, in front of her online community (ironically enough).

I won’t add any more to the smugness in the atmosphere by telling you what you should do about your Inner Titmouse. But here are five things I commit to doing to hopefully get myself into a more constructive place. I hope that sharing it with you that will help me maintain my focus and commitment.

1) I’m laying off Twitter for a while. I just can’t seem to help myself there. I’ve never been one to waste hours scrolling social media, but I lose track of time on that site. And while I love adorable pet videos, I read more than my fair share of political snark. Whenever I log off Twitter, I feel a little more like Gollum than myself, somehow. It’s been three days so far, and I am feeling better already.

2) I’m seeking out credible, contrary views. I know, they can feel hard to find, no matter what side of an issue you sit on, but that is only because the media spoon-feed us one of two things: the most self-righteous and inflammatory versions of our own thinking, or the most ignorant and deplorable face of our ideological opponents. That’s the actual algorithm, I’m pretty sure.

3) I’m learning about how we got here. I’m reading history and seeking out what hasn’t been served up to me on a silver platter.

4) I’m learning how we get out of here. I’m ashamed of my vague knowledge about the inner workings of our government and justice system. I have my privilege to thank for that and it is becoming increasingly clear to me just how damaging that collective complacency has been.

5) I’m getting off the sidelines. I am getting clearer on my own perspective on what needs solving and will offer my money and/or time to organizations that tackle the problem from that angle.

I don’t know about you, but I simply cannot afford to slam myself against the window anymore.  It’s time for something different.

​Wendy Hultmark is a professional certified coach who helps women in leadership own their story and write the next chapter. Visit www.wendyhultmark.com.